On Dan Griffin’s most recent birthday, he turned 64. But another part of him felt 24 years old.

“I kind of like to think the 24 part is leading the way,” he said Sunday afternoon in Elba, Neb.

That part is Sarah Root – the woman whose heart was donated to Dan after she died in a car accident about two and a half years ago.

Sarah died at 21 years old in early January 2016. She was a registered organ donor in Council Bluffs, Iowa, and had just graduated with a 4.0 from Bellevue University in Bellevue, Neb.

In addition to her heart, Sarah’s kidneys, her pancreas, liver, and both lungs were transplanted to a total of six people. Sarah’s bone, tissue, and skin were also donated. She would have turned 24 years old this year on May 1.

“That’s the type of person she was – (a) giving person, even after she’s gone,” Sarah’s father said during a meeting with Dan Griffin and his family.

Although heartbroken and ultimately wishing to have Sarah back with them, Sarah’s family found comfort in meeting Dan and his family on his birthday this year.

The two families came together for a community luncheon and birthday celebration on Sunday, July 29 in Elba. Sarah’s mother, Michelle, father, Scott, and brother, Scott, exchanged lighthearted quips about adding each other to family Christmas lists, merging the two families, and being “stuck” with each other from here on out. 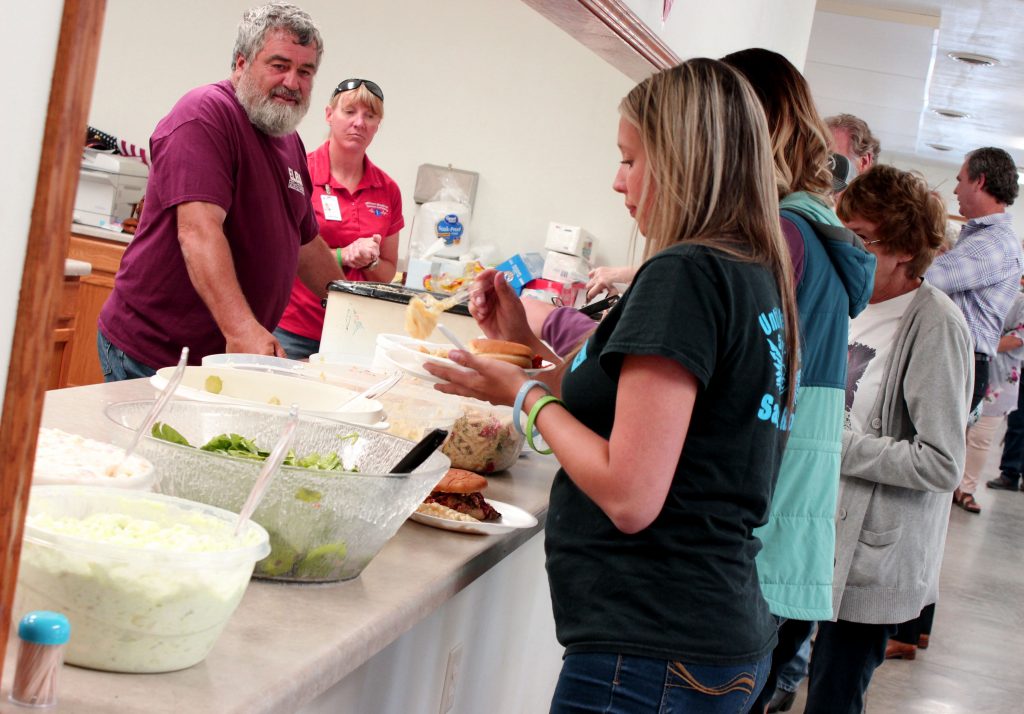 Friends and family of Sarah Root and Dan Giffin enjoy a luncheon organized by Dan’s wife, Peggy, and served by members of the Elba Fire and Rescue Department.

And although the community of family and friends erupted into laughter each time those jokes were told, a note of seriousness, gratefulness, and acceptance filled the hall while those in attendance enjoyed lunch and their children played in the bouncy house outside.

“It is very emotional,” Michelle said a few days before the Griffin family meeting. “I can’t believe I will finally get to meet you both (Peggy and Dan Griffin). To hear Sarah’s heart beating again is going to be so wonderful.”

The journey to this meeting was anything but easy. Not only did Sarah’s family lose their caring, smiling, and hardworking sister and daughter, but Dan’s path to a heart transplant was a dangerous one.

Dan had been waiting for a transplant for more than a year when he received a call on a blizzarding Tuesday night. Dan needed to be in Omaha by 7:30 a.m. the next day for the surgery. High winds and more than 14 inches of snow made the trek nearly impossible.

But the small community of Elba came together to get Dan where he needed to be. Elba Fire and Rescue as well as county snow plows and pickups led the way at midnight. The drive to Omaha took seven hours – five hours longer than usual. Dan and Peggy made it to the transplant center by 7:36 a.m., just six minutes after their deadline.

Just after the transplant, Dan’s wife, Peggy, had a feeling she knew who the donor was. After seeing news footage about Sarah’s accident, she felt confident she was the donor, but didn’t say anything to Dan until Sarah’s identity was confirmed two weeks ago in mid-July.

Now, more than two years later, Peggy arranged the birthday celebration, luncheon, and even a balloon ceremony to honor Sarah. The day was complete with not only a birthday cake for Dan, but a cake for Sarah and her family. 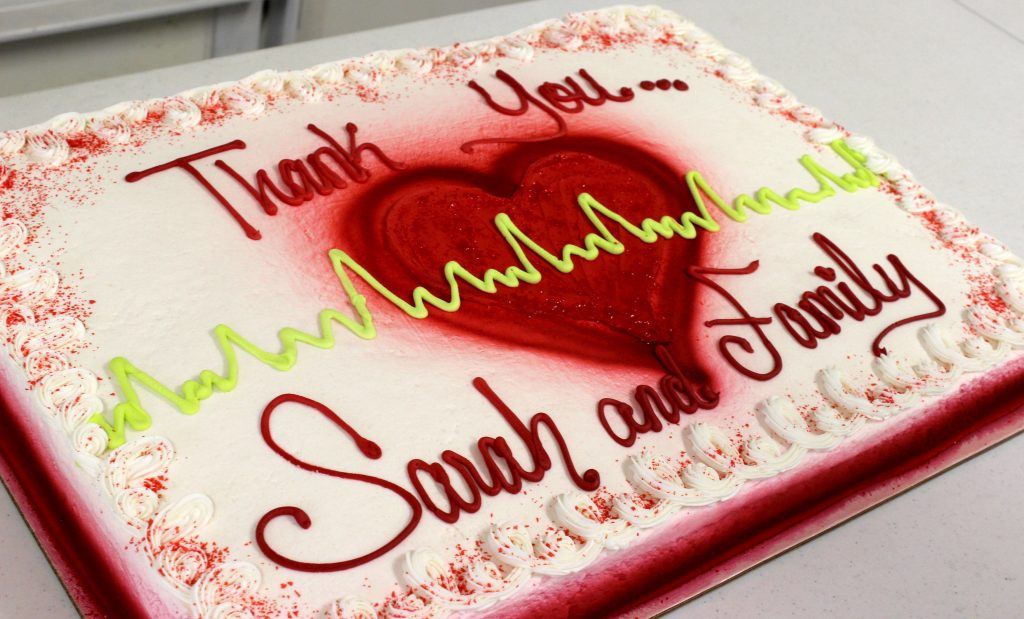 Two cakes were made for the Root and Griffin family meetings in late July in Elba — one for Dan and one for his heart donor, Sarah Root.

“I just can’t keep from getting emotional every time I think of all of this happening,” Peggy said in an email to Nebraska Organ Recovery leading up to the meeting.

Sarah’s family has also met one kidney recipient and hopes to meet the remaining organ recipients.

But for Michelle, this meeting with Dan and family was special, because she and Sarah’s brother and father had the chance to listen to her heartbeat.

“I wanted to especially meet the heart recipient because Sarah had the biggest, most wonderful heart,” Michelle told news reporters at the luncheon.

Taking turns, each family member placed a stethoscope up to Dan’s chest, immediately remembering their time in the hospital with Sarah with their ears to her chest, listening to her heartbeat before the surgery.

“She’s still here,” Dan whispered to Michelle that Sunday afternoon. “I can feel it in the air. Her presence is here.”

“You better believe it,” Michelle replied. “And as ornery as ever.” 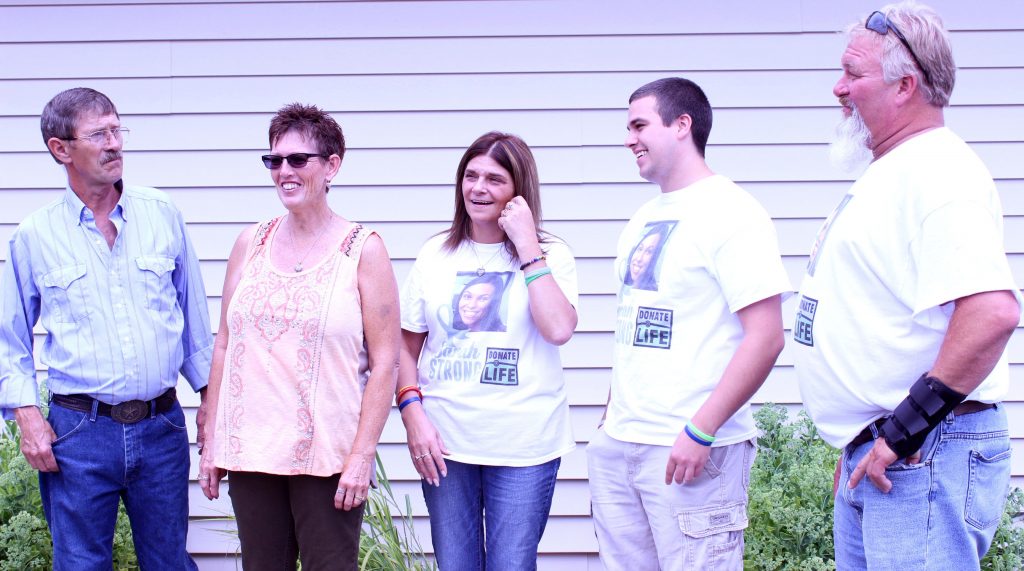 See more photos from this celebration or give others a second chance at life by registering as an organ, tissue and eye donor today.