But what makes Lane William David Kudrna’s birth even more special for his parents was the fact that he fulfilled Amber’s dream of becoming a mother, something she didn’t know for certain could happen at all — considering she’s a two-time kidney recipient.

Lane was born Sept. 21 weighing 5 pounds and 4 ounces. Although he was small, the amount of happiness he brought his parents was enormous. 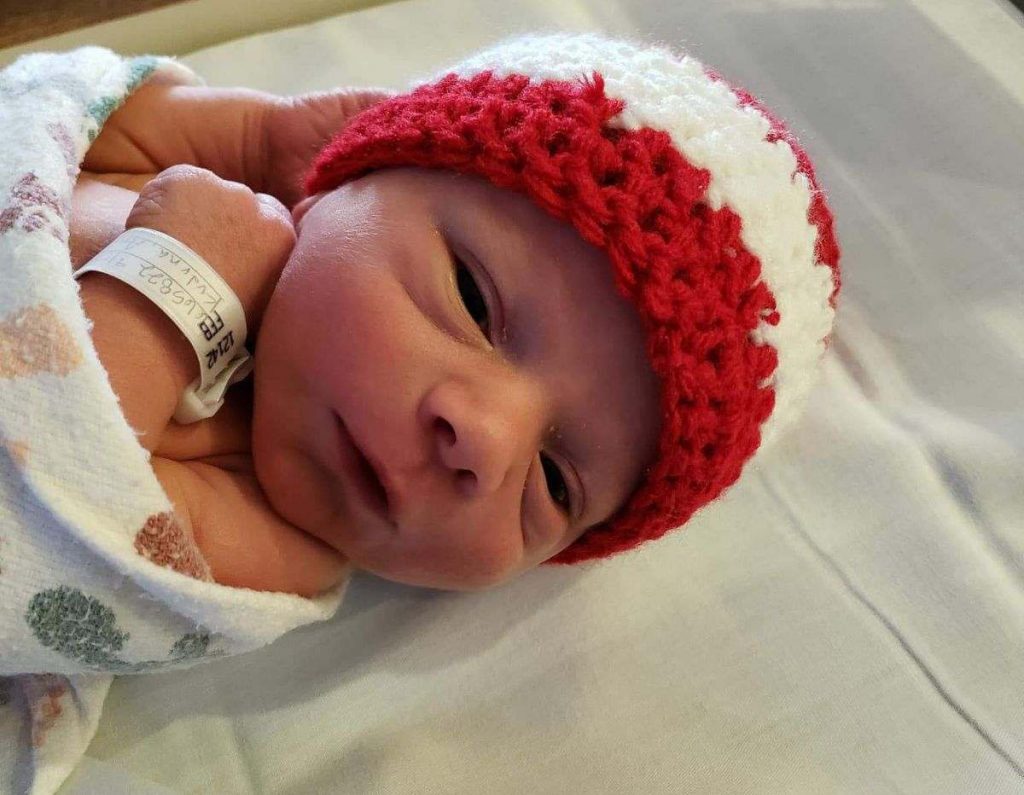 “My transplant team came by today and said congratulations and that my levels were all normal,” Amber said hours following her delivery. “He’s just such a perfect little miracle baby. We got really lucky.”

Lucky, because the journey to become a mother was more difficult for Amber than most.

One of Amber’s kidneys never developed, and then, when she was seven years old, doctors discovered she had been suffering from reoccurring non-symptom UTIs that were never treated.

At that time, Amber was living with her family in England because her father was in the military.

Doctors told her she would eventually need a kidney transplant at 15 years old. Her kidney wouldn’t be able to keep up with her growing body at that time.

“And he was right,” Amber said as she sat on her living room couch, her pug canine snuggling next to her.

The first time around, Amber received a kidney through living donation from her mother. By that time, the family had moved to Nebraska due to Amber’s medical needs. Nebraska was one of two states with the best healthcare options and in the middle of her extended family, Amber said.

Eight years later, complications led that kidney to fail. Amber eventually needed dialysis, which came with its own difficult adjustments.

“You just become numb to everything, like a robot, because you’re so dependent on dialysis,” Amber said. “I was in my mid-20s, so I was living at home with my parents. I did what I could to try and go out with friends. I worked more for socialization to make myself feel normal.”

Before dialysis days, Amber would stay up late the night before to help her sleep through the next day at the clinic for the hours-long treatment.

One morning while at the clinic receiving her dialysis treatment, Amber was about to fall asleep. But her phone rang, and she recognized the numbers belonging to a coordinator on her transplant team.

After two-and-a-half years on dialysis, Amber had a kidney. 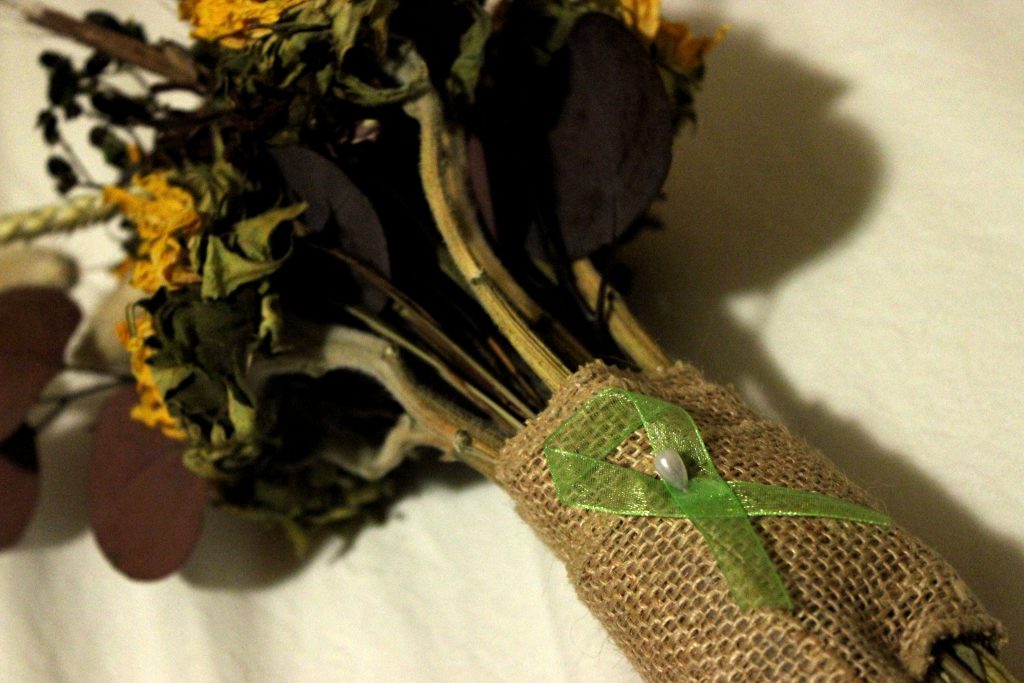 Amber made this bouquet for her wedding, which is decorated with a green ribbon to represent her kidney donor. Amber also left an open chair for the donor at her wedding to symbolize all that is possible for her because of donation.

After a successful transplant and recovery, Amber returned to work two months later and eventually met her now-husband, Adam. The couple married last October and considered having a baby soon after.

She and Adam began consulting with Amber’s transplant doctors and High-Risk OBGYN at Nebraska Medicine about preconception and the risks and complications transplant recipients face during pregnancy.

During those consultations, Amber and Adam were told they would be at a doubled risk for everything associated with a normal pregnancy, such as gestational diabetes, preeclampsia and premature birth, to name a few.

Even Adam began to question if this was something the couple should continue pursuing because of the potential risks, he said. 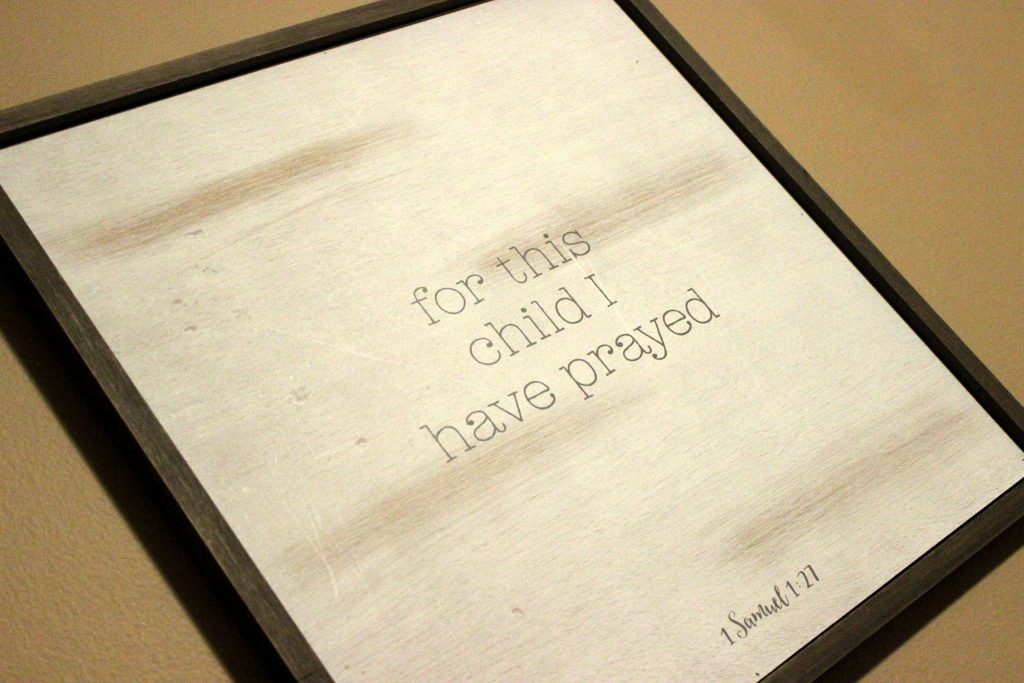 This frame hangs in Lane’s nursery above his crib and reads, “for this child I have prayed.”

Because Amber’s creatinine levels had been consistent for more than three years at that point, she and her medical team felt more comfortable moving forward. Creatinine is filtered through the kidneys and is measured by doctors to assess kidney function.

“Medicine has come a long way since my first transplant,” Amber said, “but do you want to roll the dice? For me, it was something I was willing to take the risk for because I wanted it so bad.”

Amber has always loved children and has worked in a daycare and attended college for early childhood education.

“If I could be anything in this world, I wanted to be a mom,” she said.

Amber learned she was pregnant in January. Despite all that could have gone wrong, Amber has had a relatively normal pregnancy.

“It’s been fun being pregnant,” she said. “I’ve gone through so much in this short life. It’s a full-circle moment to bring a life into this world.” 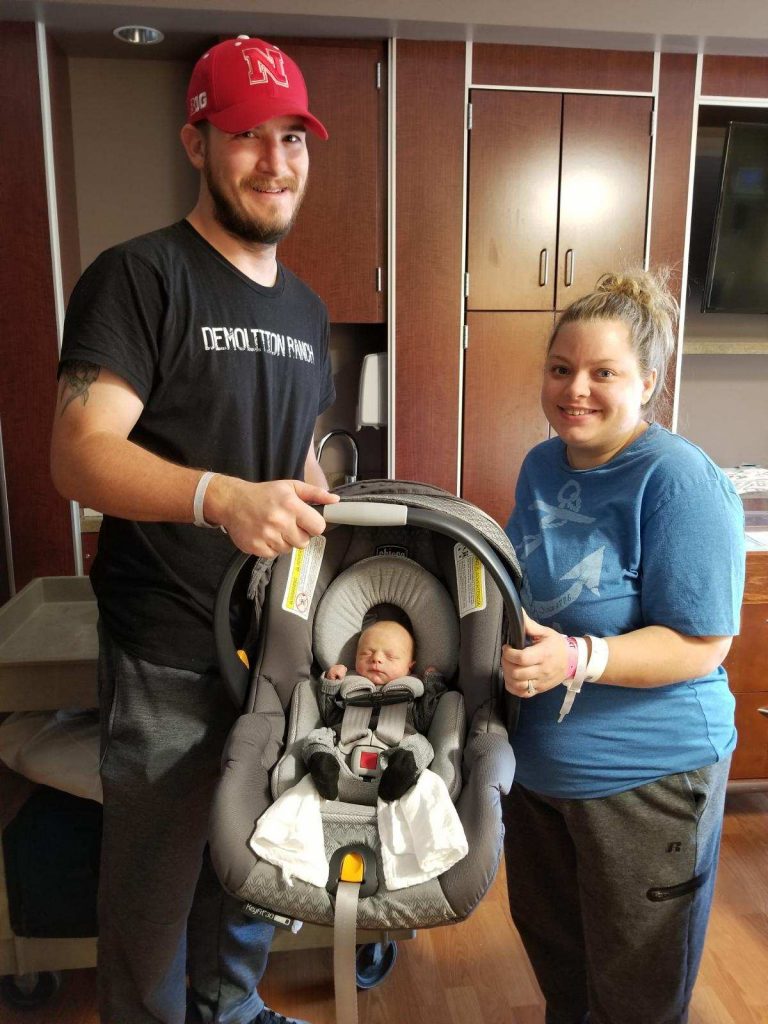 Adam and Amber prepare to head home from the hospital with newborn Lane.

Give others the gift of life by registering as an organ, tissue and eye donor today.